BERLIN (AFP) – World-renowned conductor and pianist Daniel Barenboim said on Friday he would step down as general music director of the Berlin State Opera due to deteriorating health, marking the end of an era at the legendary institution.

Argentine-born Barenboim has been hailed for a stellar career which saw him begin performing internationally as a pianist at the age of 10 and then progressing to a prominent conductor.

The son of Jewish piano teachers was also an outspoken supporter of peace in the Middle East.

“Unfortunately, my health has deteriorated significantly over the past year,” said Barenboim, 80, in a statement announcing his resignation from one of the world’s top classical music venues.

“I can no longer deliver the performance rightly expected of a general music director.”

Barenboim, who had held the position since 1992, asked Berlin’s top culture official Klaus Lederer to release him from his contract on 31 January.

It was not immediately clear who would succeed him.

The conductor said his years at one of Berlin’s three major opera houses were “musically and personally inspiring in every way”.

This file photo taken on November 9, 2019 shows conductor Daniel Barenboim performing with the Staatskapelle orchestra during a public performance to mark the 30th anniversary of the fall of the Berlin Wall, at the historic Brandenburg Gate in Berlin (MICHELE TANTUSSI / AFP)

“I think the State Opera and I have brought us great happiness,” he said, adding that he was “particularly happy and proud” that the Staatskapelle orchestra at the venue elected him chief conductor for life in 2000.

“Over the years we have become a musical family and will remain so,” he said, also expressing his “reverence” for the solo singers, choir and opera house staff.

He thanked former German chancellor Angela Merkel and former parliamentary spokesman Wolfgang Schaeuble for their loyal attendance at his performances, and Lederer for standing by his side “in difficult moments” in reference to his past allegations of bullying musicians.

“Obviously I will remain – as long as I live – deeply connected with music and I am ready to continue conducting, especially with the Staatskapelle Berlin”.

In October, Barenboim said he would abandon “some of his entertainment activities, particularly conducting engagements,” over the next few months after being diagnosed with a “serious neurological condition.”

He had already canceled a series of concerts for health reasons last year.

The German capital’s Philharmonic said it would take over as planned for three performances this weekend. 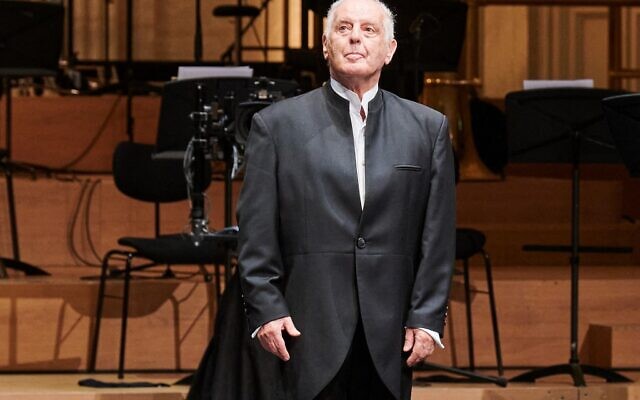 This file photo taken on September 11, 2020 shows conductor Daniel Barenboim attending the festivities to mark the 450th birthday of the Staatskapelle, the resident orchestra of the Berlin State Opera in Berlin (Annette Riedl / POOL / AFP)

“For more than 30 years he let his inexhaustible force of world-famous artistic personality benefit this house and its Staatskapelle Berlin,” he said in a statement.

“One can only imagine how difficult it was for Daniel Barenboim to take this step,” added Schulz, saying the staff wished him “the best in his continued recovery.”

Lederer called Barenboim “one of the most extraordinary personalities in Berlin” and expressed regret at his departure, although he had “great respect” for his decision.

There are few musicians alive today with a knowledge or breadth of repertoire comparable to Barenboim’s.

The virtuoso pianist married British cellist Jacqueline du Pre in 1966 and they formed one of the most celebrated musical couples of the time. Their romance came to a tragic end when she died of multiple sclerosis at the age of 42.

In addition to subsequent conducting posts in London, Paris and Chicago, Barenboim gained further fame when he co-created a foundation and orchestra to promote cooperation between young musicians from Israel and Arab nations.

He also launched the Barenboim-Said Akademie in Berlin which trains talented musicians mainly from the Middle East and North Africa for a professional career.

In 2007, Barenboim became the first person in the world to hold Israeli and Palestinian passports.

Lederer in 2019 had extended Barenboim’s contract at the State Opera until 2027 despite several members of the 450-year-old orchestra accusing him of autocratic style and intimidation.

A three-month investigation concluded that there was no evidence of wrongdoing on Barenboim’s part, but the contract extension included a commitment to improve the working atmosphere.

You are a dedicated reader

That’s why we founded The Times of Israel ten years ago – to provide discerning readers like you with must-have coverage of Israel and the Jewish world.

So now we have a request. Unlike other news organizations, we have not created a paywall. But because the journalism we do is expensive, we invite readers to whom The Times of Israel has become important to help support our work by joining The community of the time of Israel.

Thank you,
David Horovitz, founding editor of The Times of Israel