In an article recently published on the International Journal of Molecular SciencesScientists described the importance of the gut-brain-microbiota axis in establishing optimal mental health in emerging adulthood (ages 18-25).

Study: drugs, guts, brains, but not rock and roll: the need to consider the role of the gut microbiota in contemporary mental health and well-being of emerging adults. Image Credit: Alpha Tauri 3D Graphics

The emergence of adulthood is a critical period for neuronal development, neuroplasticity and maturation of the hypothalamus-pituitary-adrenal axis. During this period, stress responses, including fluctuating hormone levels and different activation of the hypothalamus-pituitary-adrenal axis, have a significant impact on mental health development. Studies have shown that mental illness frequently occurs in emerging adults during this period.

The gut microbiota is a collection of different microorganisms, including bacteria, that reside in the gastrointestinal tract. Various factors, including genetic factors, early childhood factors (maternal infection, antibiotic use, etc.) and environmental / lifestyle factors (nutrition, physical activity, stress, etc.), can severely alter the composition and diversity of the intestinal microbiota.

Recent evidence indicates that the emergence of adulthood is associated with a unique vulnerability in the gut microbiota. In emerging adults, the gut microbiota is less diverse, simple, and more unstable than in children, adolescents, and the elderly. In this article, scientists hypothesized that the gut-brain-microbiota axis could play a role in determining mental health problems, which are increasing significantly in Western countries, most likely due to unfavorable life behaviors. 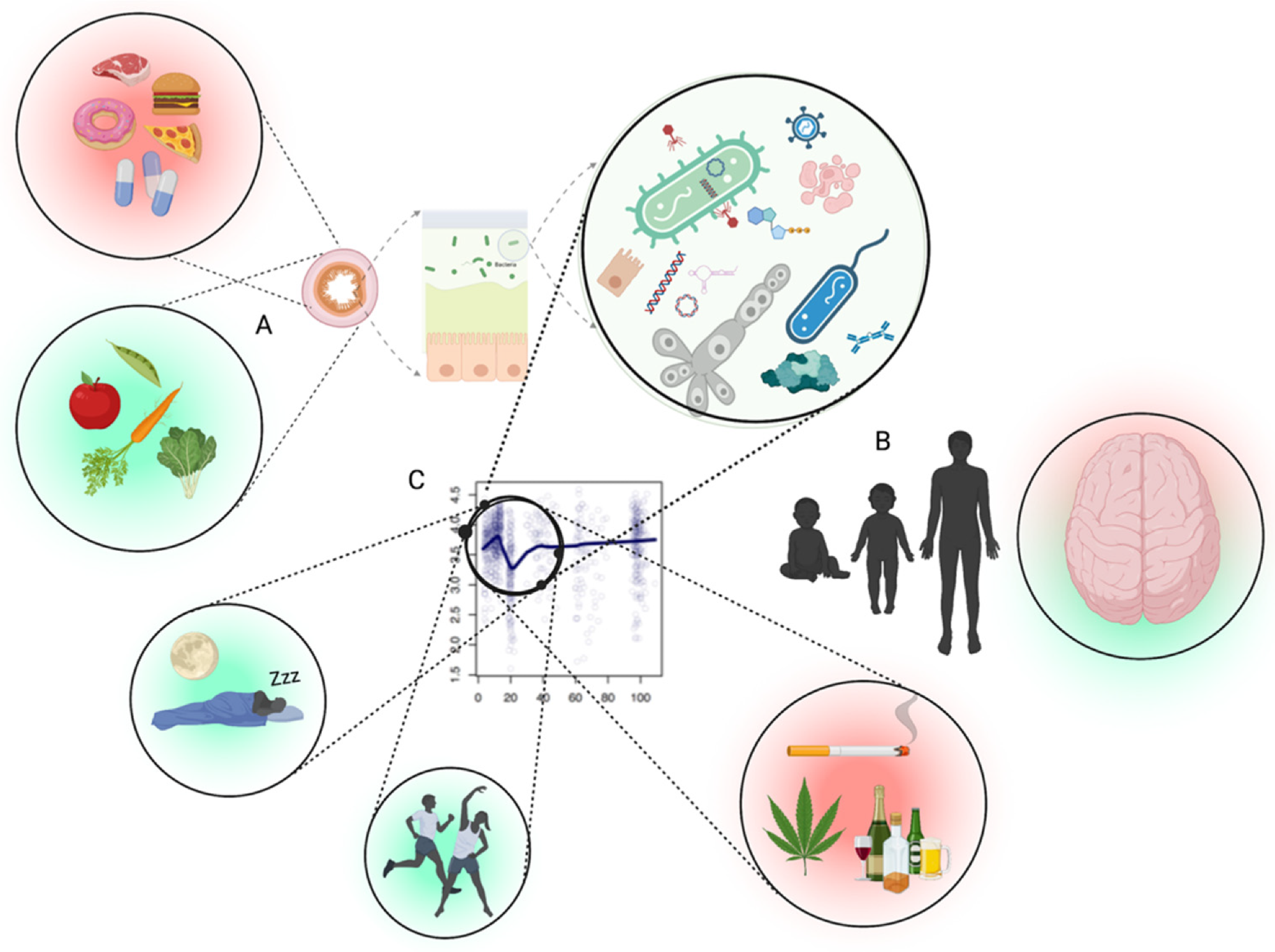 The interface between the gut microbiota and mental health is likely to depend on several factors. (A) The former are the inputs to the intestinal tract that shape the microbiota accordingly (diet, drugs, antimicrobials, etc.). (B.) Periods in which the microbiota undergoes changes in diversity (alpha) occur in healthy people, especially in their late teens and early twenties, which likely results in differences in metabolic production affecting brain health . (c) The intersection of the adolescent brain, combined with a normally fluctuating microbiota of the age group, promoting a desirable microbiota through physical activity / exercise and circadian rhythm, and a less desirable microbiota using different substances. Part (C.) adapted from Bian et al., 2017. Figure created with Biorender (accessed April 29, 2022).

Microorganisms residing in the gut produce several vital components, such as short-chain fatty acids, brain-derived neurotrophic factors, and neurotransmitters, which mediate communication between the gut and the brain. An imbalance in the gut microbiota can lead to microbial lipopolysaccharide (LPS) mediated production of inflammatory cytokines, which subsequently affect the hypothalamic-pituitary-adrenal axis by stimulating the afferent vagal nerve.

Impact of the gut microbiota on mental health

According to the available literature, there is a link between gut microbiota and mental health. In this context, studies have shown that antibiotic-induced alteration of the gut microbiota is associated with altered emotional behaviors. The gut-brain-microbiota axis is known to play an essential role in the development of various neurological and psychiatric diseases, including Alzheimer’s disease, Parkinson’s disease and autism spectrum disorder. Any imbalance in the gut microbiota during the period of emerging adulthood can induce a cascade of events that have prolonged negative impacts on physical and mental health. 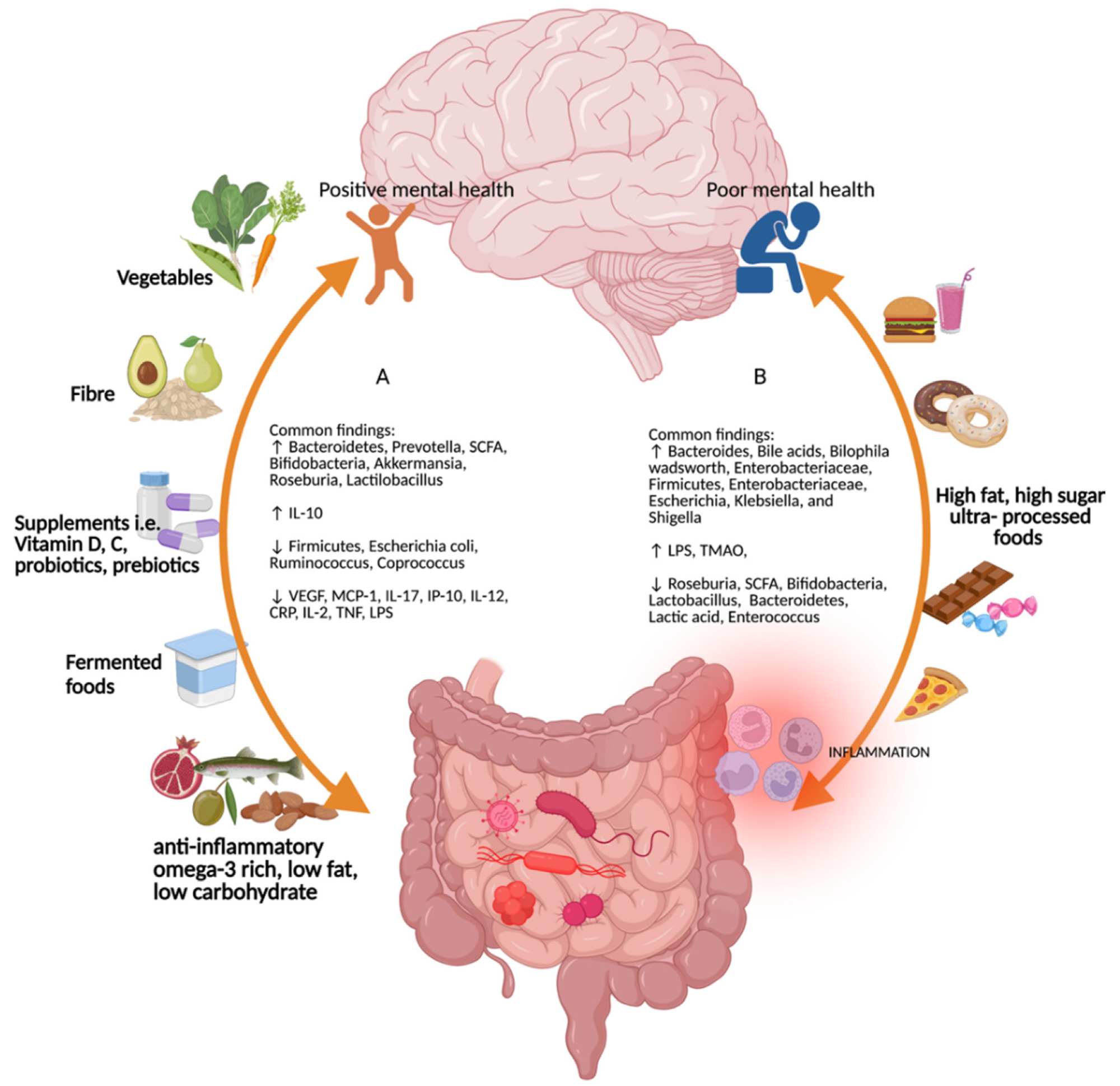 It is well known that regular physical activity is essential for maintaining metabolic and cardiovascular fitness and for improving mental health. Additionally, regarding gut microbial diversity, physical activity is known to increase the levels of beneficial microbes and metabolites in the gut.

Excessive consumption of nicotine, alcohol, cannabis and illegal substances has been frequently observed in emerging adults, particularly those residing in Western countries. These substances are known to have a negative impact on physical and mental health.

Neuronal nicotinic acetylcholine receptors are vital for the development and maturation of the central nervous system. The consumption of nicotine in the first years of life can lead to addiction, cognitive decline and psychiatric disorders. Furthermore, the consumption of nicotine can induce an imbalance of the intestinal microbiota by increasing the permeability of the intestinal mucosa and disrupting the immune responses of the mucosa.

Regular sleep patterns can be affected by certain factors, including shift work, exposure to night light, inconsistent timing of food intake, unhealthy eating, and jet lag. A change in sleep timing and pattern is commonly seen among adolescents, associated with mental disorders such as depression and anxiety.