Britons’ confidence in science is at its highest after the Covid pandemic, a new report reveals, but disinformation on social media continues to pose a “threat to scientific credibility”.

This statistic also compares with 88% of Europeans and 89% of people globally who trust science in 2022.

In the UK, 57% of Brits say they value science more after the pandemic, possibly due to scientists’ efforts to create Covid vaccines.

However, misinformation “is rife” on social media and threatens the future of public understanding of science, the report said.

If the public cannot trust the science news, the consequences could include more public health crises, greater division within society, and more severe effects of climate change.

Scroll down for the video 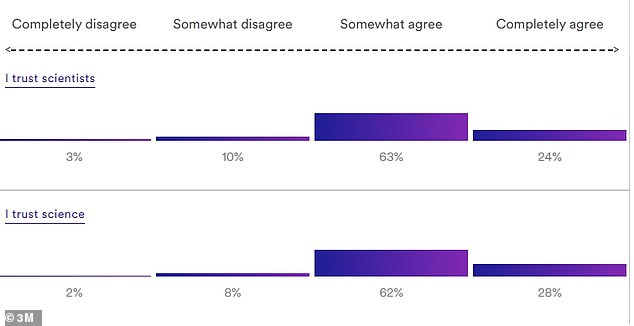 According to the results, 90% of Brits say they trust science and 87% of scientists

– 47% of Brits think it is too difficult to know which media sources are credible.

– 78% of Brits want to know more from scientists about their work.

When it comes to scientific facts, people are more likely to trust traditional media, such as newspapers and magazines, than social media, 3M said.

The findings suggest that scientists can aid scientific credibility online by increasing their social media presence, according to the company.

“There is an excellent opportunity for us to come together as the scientific community and be the guardians of good science by directly engaging the public to help combat the spread of disinformation,” said Sarah Chapman, 3M’s Technical Manager for Europe, the Middle East and Africa.

“These data show us that the door is open to using scientific knowledge to educate the public on the most important issues of the day, from climate change to vaccine development to artificial intelligence.”

The research was conducted for 3M by the global research firm Ipsos through a combination of online and offline surveys.

The surveys were conducted last fall with 1,000 adults in 17 countries including Australia, Brazil, China, France, Germany, Italy, Japan, Mexico, the United Kingdom and the United States.

– Go to the interactive 3M State of Science index page

– For each topic, filter the results by region by clicking on “Countries”

– You can also filter the results by age, gender, income and more

However, when it comes to trusting what they read, the results showed that it is important to know exactly where people are reading or hearing about science.

The main reason given by UK respondents for this mistrust is that it is too difficult to know which media sources are credible (47%).

On a positive note, 78% of people in the UK said they want to hear more from scientists about their work.

In Europe this value was slightly higher (79%) and somewhat higher globally (83%).

These statistics show scientists that they have the opportunity for “more direct communication on traditional and social platforms,” ​​3M said.

In Europe in general, people recognize that there is widespread misinformation on social media (91%) and traditional media (72%).

Furthermore, 83% of Brits and 81% of Europeans believe that if people don’t like science, there are negative consequences for society.

Globally, the pandemic has caused many people to reevaluate their views and their relationship to science, probably as it has played a bigger role in our lives.

For example, experiencing the changes caused by the pandemic has encouraged an understanding of viruses and how they make us sick.

The results also showed that 43% of Brits consider science very important to their daily life and only 25% of Brits are skeptical of science.

For Europeans in general, 45% say they appreciate science now more than they did before the pandemic. In the UK, this figure is higher: 57%.

“The deep level of trust people have in science and the growing role it plays in their lives is a very promising sign for the future,” Chapman said.

“We and the global scientific community must continue to encourage and highlight trustworthy and diverse voices in science to help solve the world’s toughest challenges.”

Covid-19 triggered the world’s first “infodemic” with many people unable to separate fact from fiction, according to a 2020 report.

Two American artificial intelligence experts have accused the coronavirus pandemic of an intense barrage of scientific studies in a rush to make the information available.

By mid-August 2020, more than 8,000 pre-prints of scientific articles containing the words Covid-19 or SARS-CoV-2 had been published in the online archives of medicine, biology and chemistry.

But this wealth of material is hard for anyone to digest and ranges from respectable to unreliable, they said.

Increased use of AI to digest and consolidate research could therefore be the key to separating fact from theory and ensuring that reliable information is properly recognized.